In 2010, the world’s largest tobacco conglomerate descended on an international courtroom ready to fight. Philip Morris International, the company behind cigarette brands like Malboro and Chesterfield, sued the South American country of Uruguay for $25 million. But why pick on a country whose entire GDP at the time was half the size of Philip Morris’ net worth? The answer was simple: Uruguay represented a threat to the tobacco industry, and Philip Morris realized that if it failed to intervene now, other countries would soon follow Uruguay’s lead.

The most urgent threat to the tobacco industry was newly-elected Uruguayan President Tabare Vásquez. In 2005, a month before the former oncologist took office, Uruguay was one of 168 countries that signed on to the World Health Organization’s new Framework Convention on Tobacco Control, which requires countries to implement measures designed to reduce tobacco use. 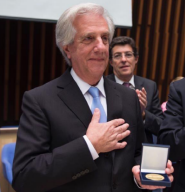 The new President then wasted no time—in 2006, he implemented a total ban on cigarette smoking in all enclosed spaces except homes, which was widely enforced. President Vásquez followed the tobacco ban with an increase in tobacco taxes. By the time he left office for the first time in 2010, these taxes had made a pack of cigarettes seventy percent more expensive.

However, bans and taxes weren’t the only regulatory initiatives that made Philip Morris nervous. In its unprecedented lawsuit, the tobacco giant took aim at two laws. The first was the Single Presentation Requirement Law, which limits cigarette brands to selling only a single variation. Crucially, this prevented Philip Morris from selling alternative Marlboro cigarettes like Marlboro “light,” Marlboro “mild,” and Marlboro “Blue.” These terms had long misled the public into thinking that smoking “light” or “mild” cigarettes would have lesser health effects than smoking “normal” ones. Let’s be clear, there is zero scientific evidence that supports that claim. Unsurprisingly, the Single Presentation Requirement Law halved the number of smokers who falsely believed that “light” cigarettes were less harmful. Of course, this change in public opinion threatened Philip Morris’ business.

The second law targeted in the lawsuit was the increase in the size of health warnings on cigarette packets. Cigarette manufacturers now had to cover 80% of their packets with a government health warning, a jump from 50% before the new law. These health warnings were incredibly morbid, including images of deformed babies and body parts. Phillip Morris complained that with the health warnings covering so much of the packaging, there was no room for its own trademark brands and logos. It cited “expropriation without compensation,” as Uruguay was taking away Phillip Morris’ ability to market itself without reimbursing the company. 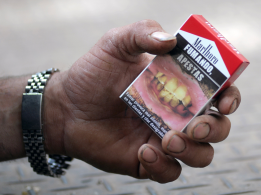 Pictured: A Marlboro cigarette pack in Uruguay with a graphic public health warning covering 80% of the front and back.

Flanked by three of the top international law firms in the world, Philip Morris poured over $17 million into the suit. Caught in a legal battle with huge international implications, Uruguay stepped up to the plate. Its government, backed financially by Bill Gates and Michael Bloomberg, shelled out $10 million in legal fees, hired an experienced Washington law firm, and went to battle in the courts for six straight years.

Finally, in 2016, Uruguay emerged victorious. The court ruled in favor of Uruguay’s right to enforce anti-tobacco measures and ordered Philip Morris to pay $7 million to cover Uruguay’s legal fees. Bloomberg subsequently declared, “No country should ever be intimidated by the threat of a tobacco company lawsuit, and this case will help embolden more nations to take actions that will save lives.” In a national address, President Vásquez told his country, “We reaffirm our commitment to continue a direct and frontal fight against tobacco consumption.”

Indeed, in 2018, Uruguay passed the revolutionary plain packaging law. This mandates that tobacco companies sell their products only in drab, government-standardized packaging, with all of the graphic health warnings included. The result of this long battle has been a public health success. At the time of the first national anti-tobacco campaign in 2006, forty percent of all Uruguayans were smokers. In 2017, that number was down to less than twenty-two percent.

Uruguay no doubt faces more challenges in the war against tobacco. With companies like Philip Morris virtue signaling promotions of a “smoke-free culture” and investing heavily into e-cigarettes, a new dawn of public health enforcement has arrived. But if we’ve learned anything from Uruguay’s past, it’s that the South American country is ready to fight—and win.